Batman is an imaginary superhero whose secret identity is Bruce Wayne; an extravagant American playboy, celebrity socialite, philanthropist, and owner of Wayne Enterprises who’s the main agenda are to fight crime in Gotham City.After seeing his parents, Dr. Thomas and Martha Wayne being killed when he was a child, Batman swore vengeance against every criminal.

The Character Batman, originally called Bat-man, was first created by Bob Kaneand the story written by Milton (Bill) Finger in 1939. The superhero appeared in the American Comic Books published by DC comics. Despite being depicted as a superhero, Batman has no superpowers. Instead, he depends on physical and mental prowess, martial arts and an obsession for justice. To keep his identity secret and scare his enemies, Wayne wears a Bat-suit that consists of a close-fitting cowl with ear-like projections, utility belt, cape with fin-like projections, and bodysuit with a black bat emblem on the chest. He lives on the outskirts of the city.

With such a huge thirst for revenge, Batman has a gallery of enemies that include Joker, Clayface, Hugo Strange, Hush, Mad Hatter, Mr. Freeze, Victor Zsasz and Two-Face to name but a few. Each one of them uses their abilities to make the lives of Gotham City residence impossible.

Batman has also attracted a huge crowd of allies who will do anything to see him succeed at flushing out criminals from the city. They include Alfred; Bruce Wayne’s butler who is well aware of who Batman is, Ace the Bat-Hound; Batman’s canine partner, Vicki Vale the investigative journalist and the Justice league that is made up of other superheroes.
Several great actors have played the part of Batman since the creation of the superhero. In the animation section, the voice actors include Kevin Conroy, Bruce Greenwood, Daran Norris, Kirk Thorton, and Michael Dobson among others. On screen, the actors include Lewis Wilson, George Clooney, Ben Affleck, Robert Lowery, Adam West, Michael Keaton and more.

With the development of the Batman story, the superhero earns names such as the Caped Crusader, Dark Knight, and World’s Greatest Detective. Besides having the story of Batman in books, the same is licensed and presented on newspapers, stage shows, Radio dramas, TV, Film, and Merchandise such as toys, video games, and clothes. 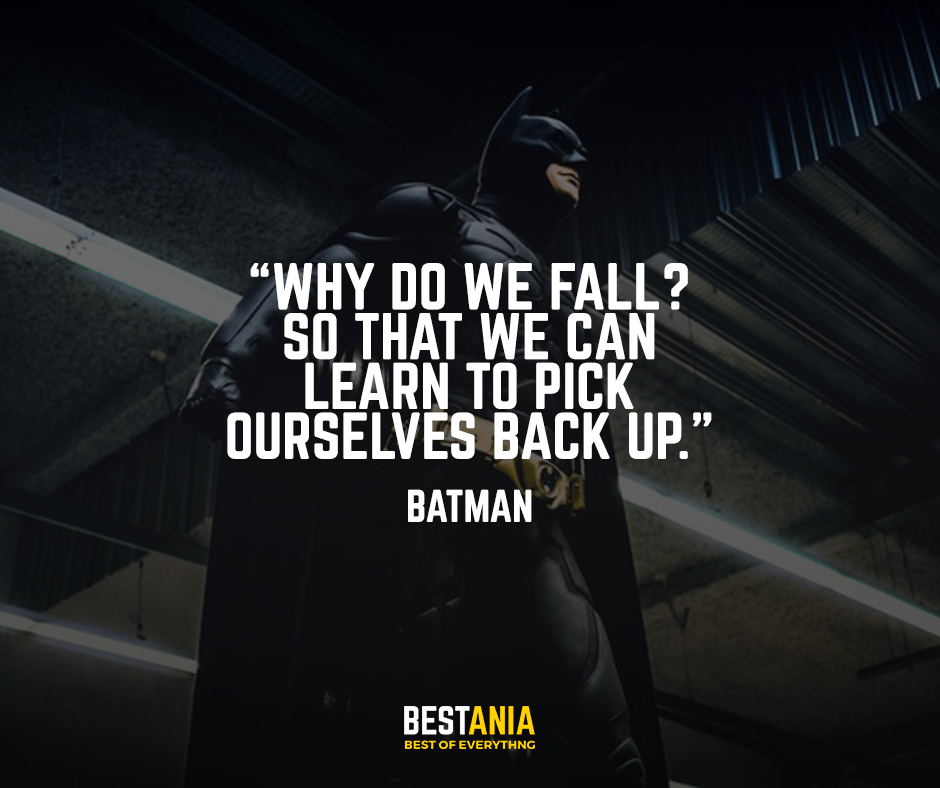 “WHY DO WE FALL? SO THAT WE CAN LEARN TO PICK OURSELVES BACK UP.” – BATMAN 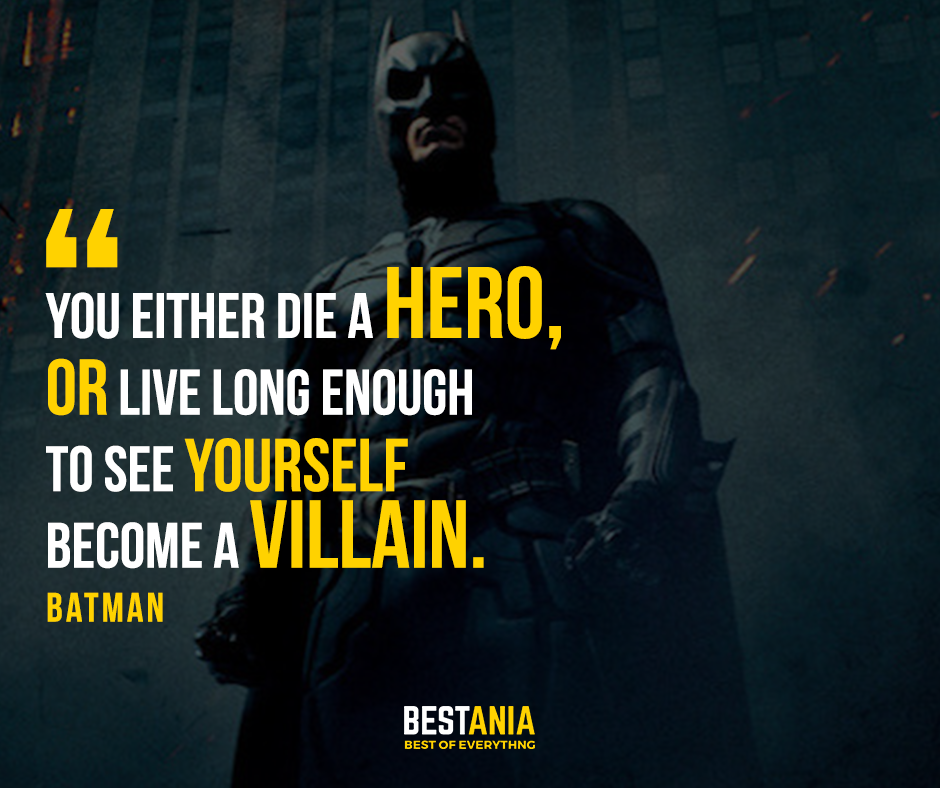 “YOU EITHER DIE A HERO, OR LIVE LONG ENOUGH TO SEE YOURSELF BECOME A VILLAIN.” – BATMAN

IF YOU’RE GOOD AT SOMETHING, NEVER DO IT FOR FREE. -THE JOKER 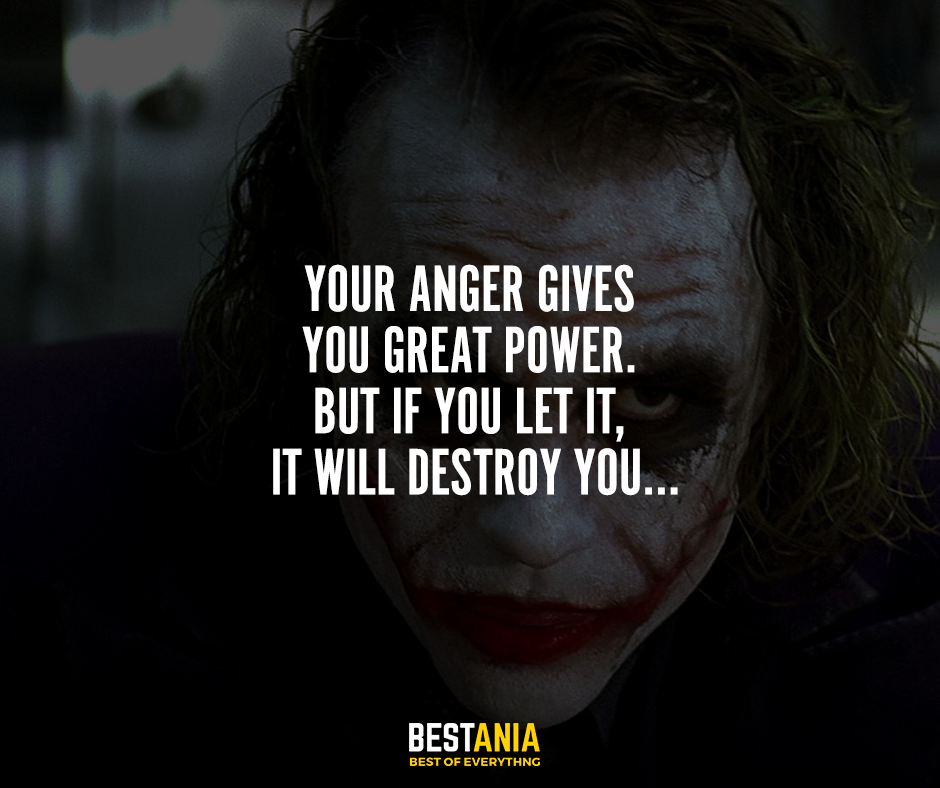 YOUR ANGER GIVES YOU GREAT POWER. BUT IF YOU LET IT, IT WILL DESTROY YOU… BATMAN 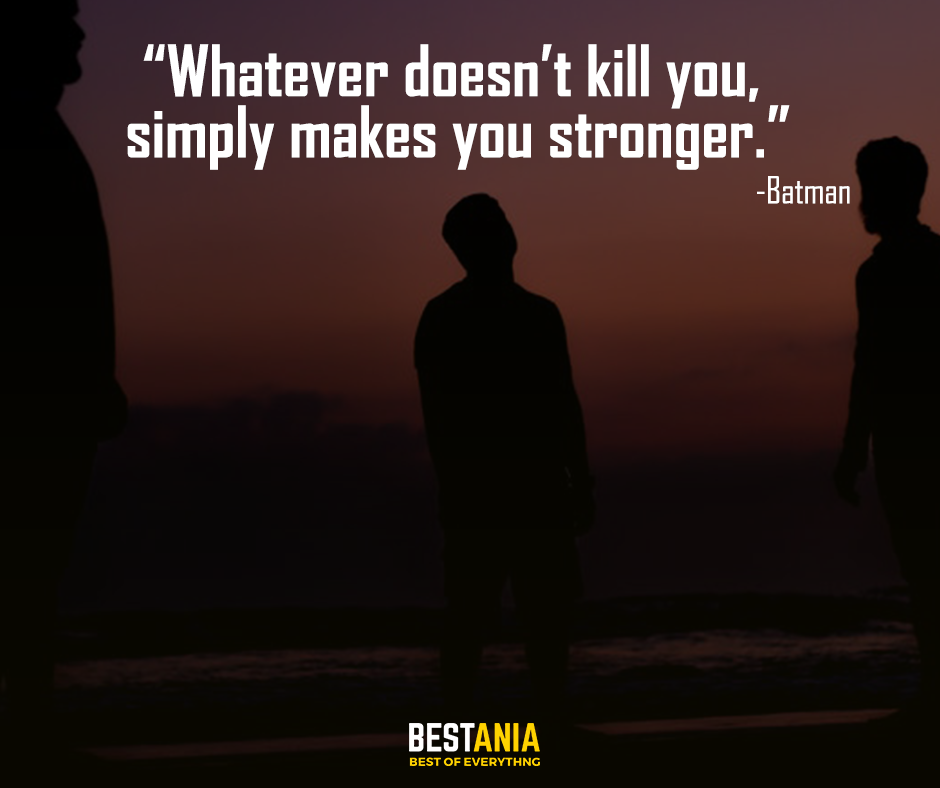 “WHATEVER DOESN’T KILL YOU, SIMPLY MAKES YOU STRONGER.” – BATMAN 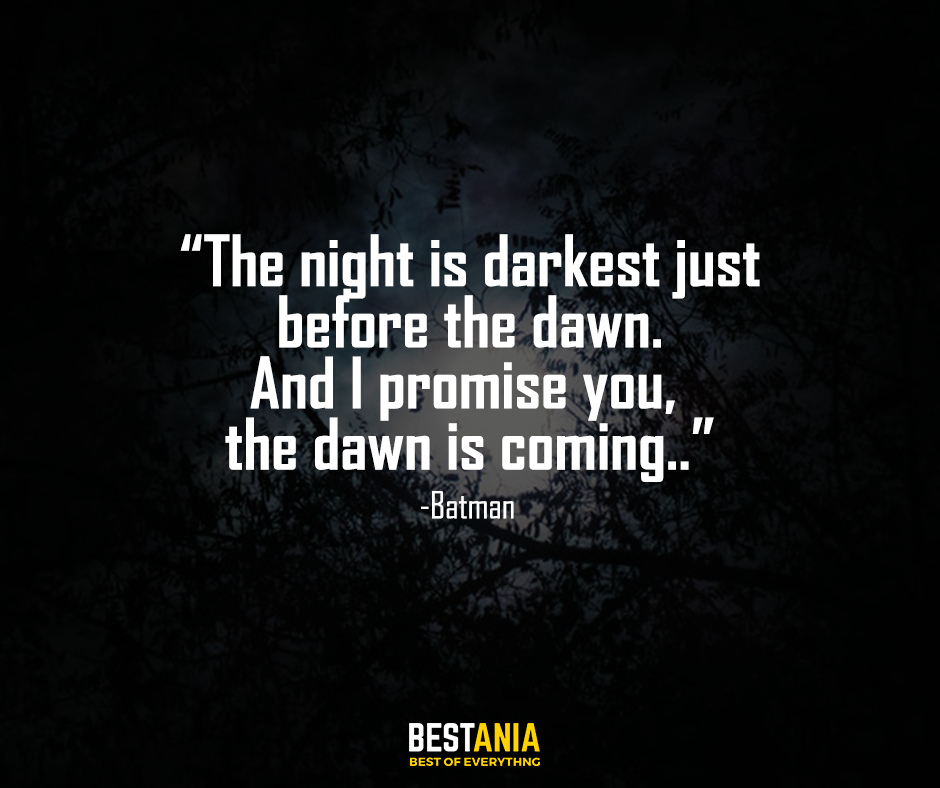 “THE NIGHT IS DARKEST JUST BEFORE THE DAWN. AND I PROMISE YOU, THE DAWN IS COMING.” – BATMAN

“THE ONLY SENSIBLE WAY TO LIVE IN THIS WORLD IS WITHOUT RULES.” – BATMAN 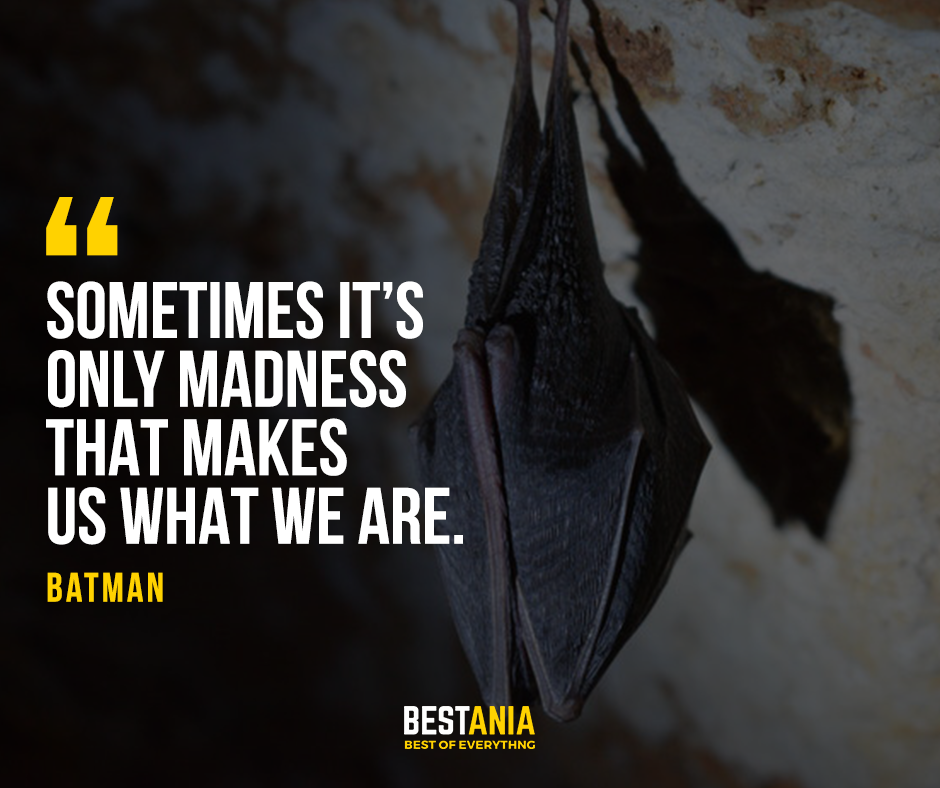 “SOMETIMES IT’S ONLY MADNESS THAT MAKES US WHAT WE ARE.” – BATMAN 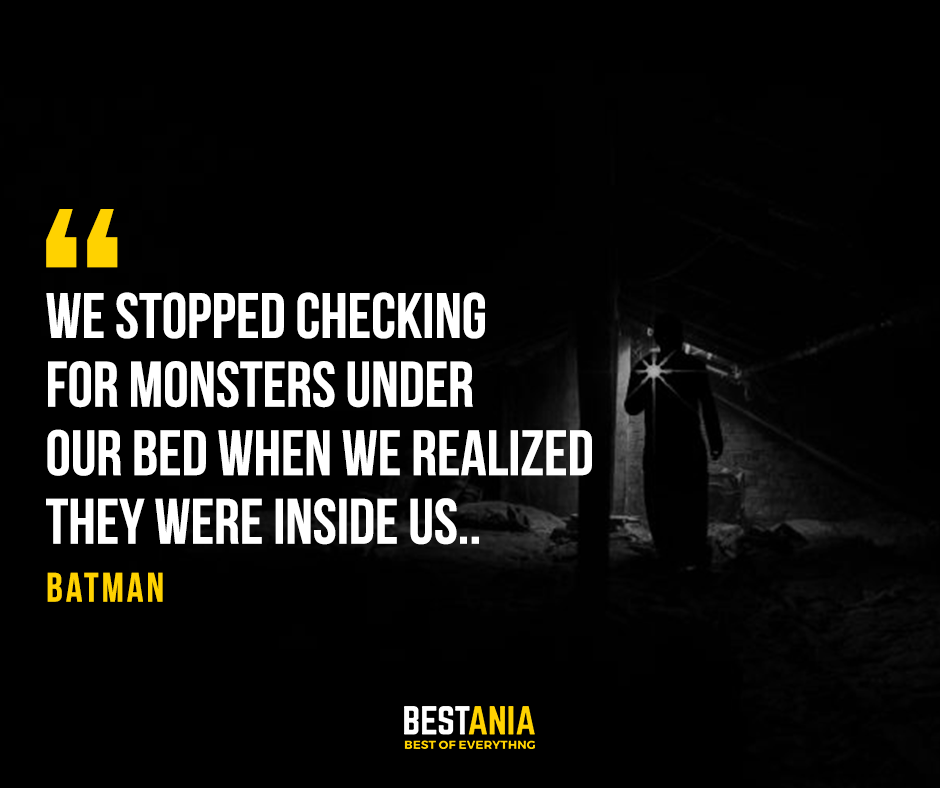 “WE STOPPED CHECKING FOR MONSTERS UNDER OUR BED WHEN WE REALIZED THEY WERE INSIDE US.” – THE JOKER 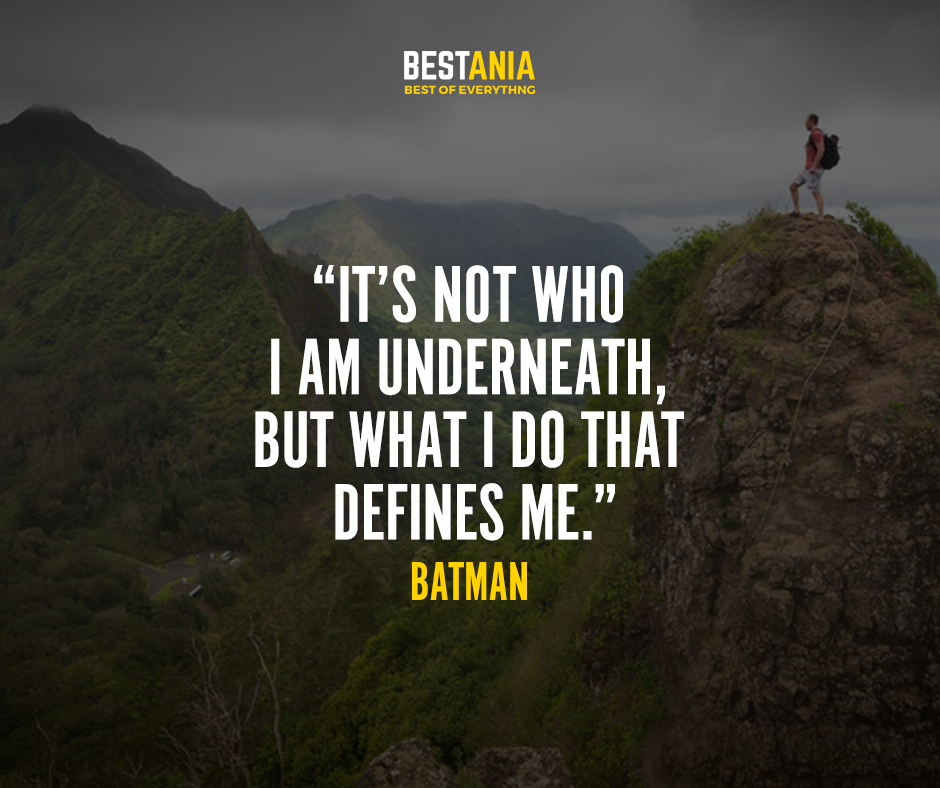 “IT’S NOT WHO I AM UNDERNEATH, BUT WHAT I DO THAT DEFINES ME.” – BATMAN 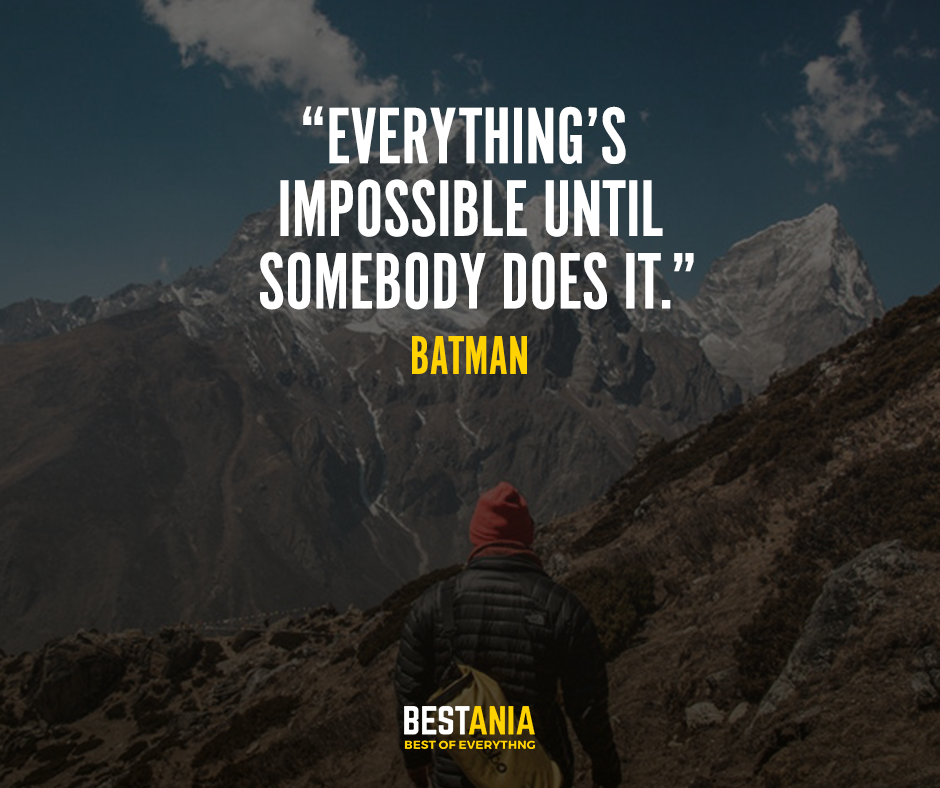 “EVERYTHING’S IMPOSSIBLE UNTIL SOMEBODY DOES IT.” – BATMAN 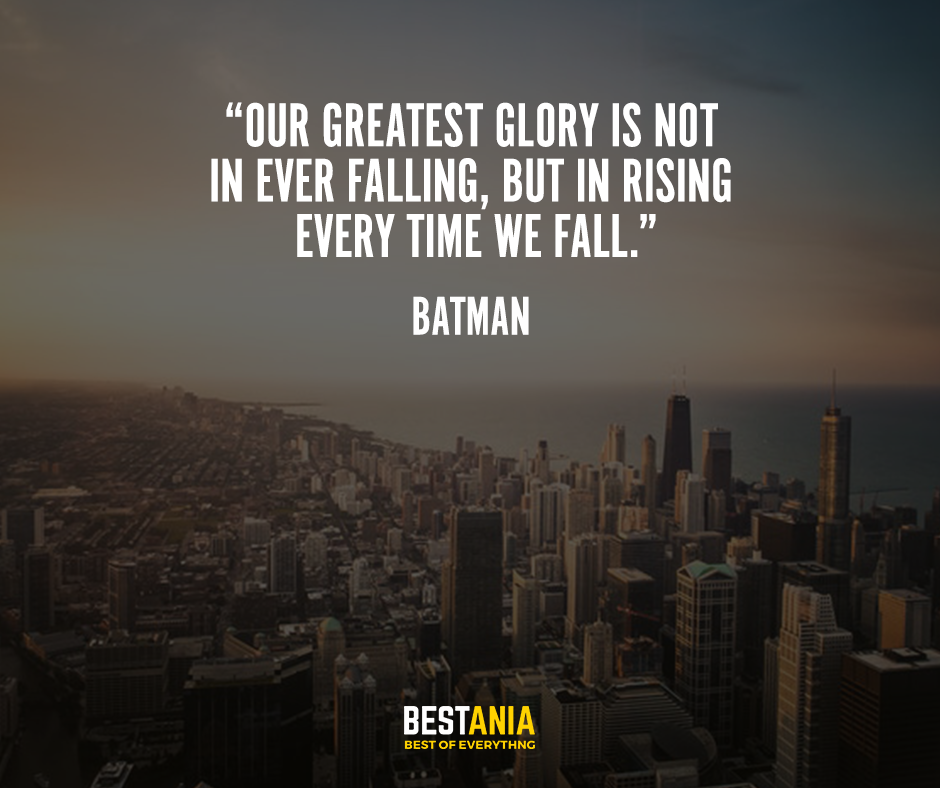 “OUR GREATEST GLORY IS NOT IN EVER FALLING, BUT IN RISING EVERY TIME WE FALL.” – BATMAN