Whether he was picking up cars or drinking 156 beers in one sitting, these Andre the Giant facts prove that he was larger than life in every imaginable way. 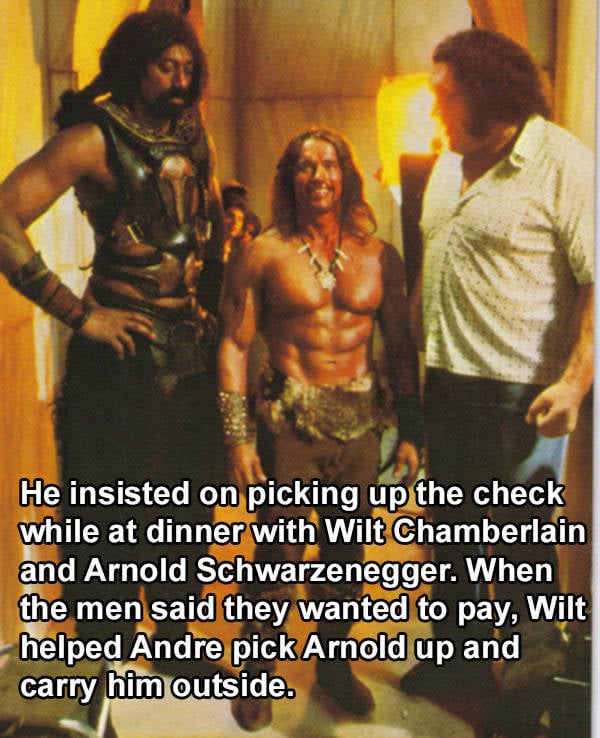 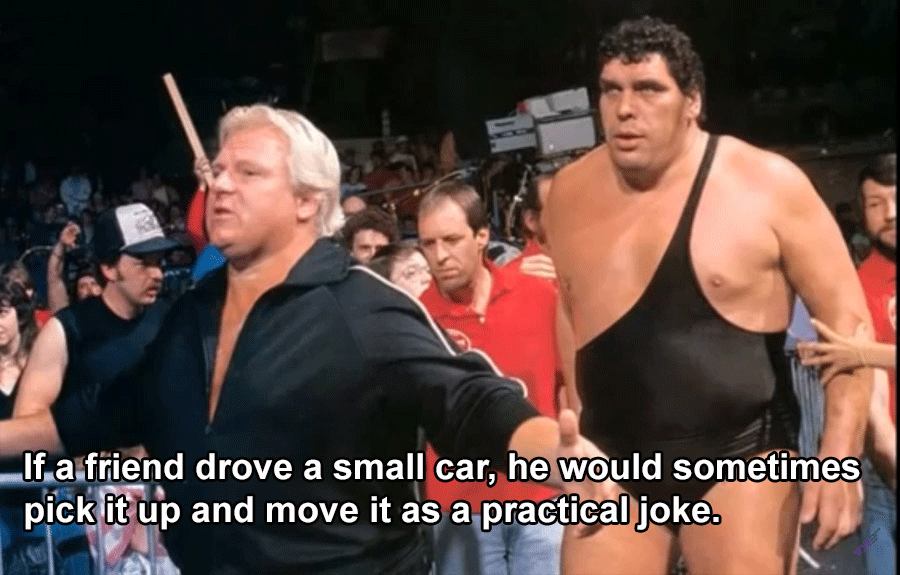 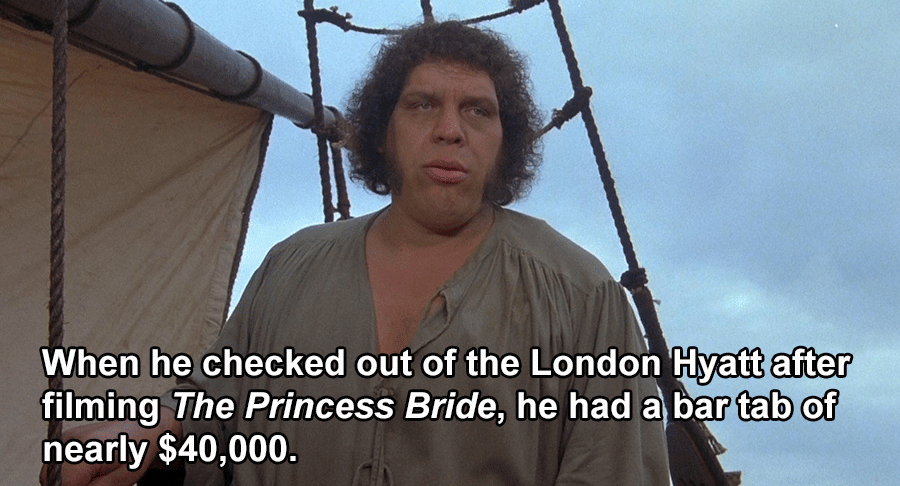 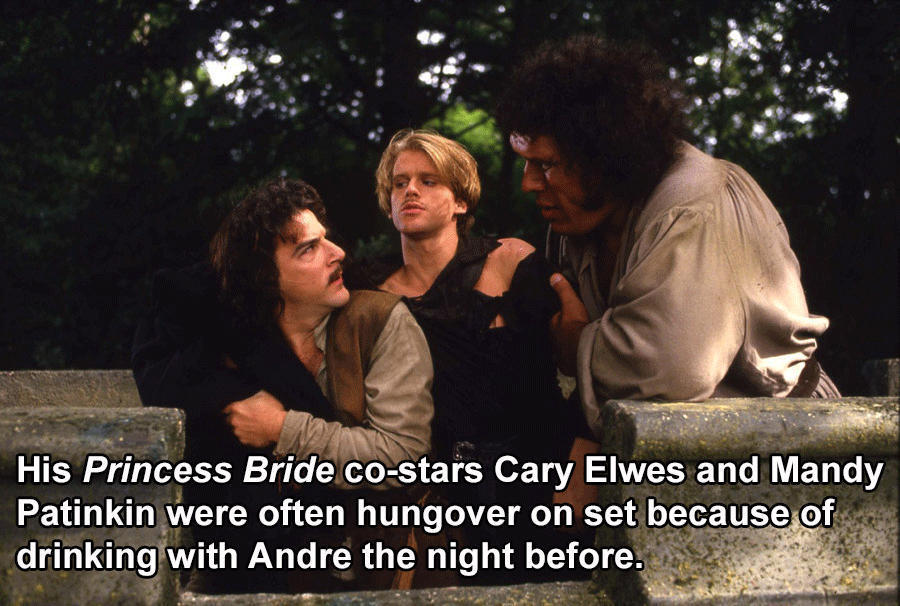 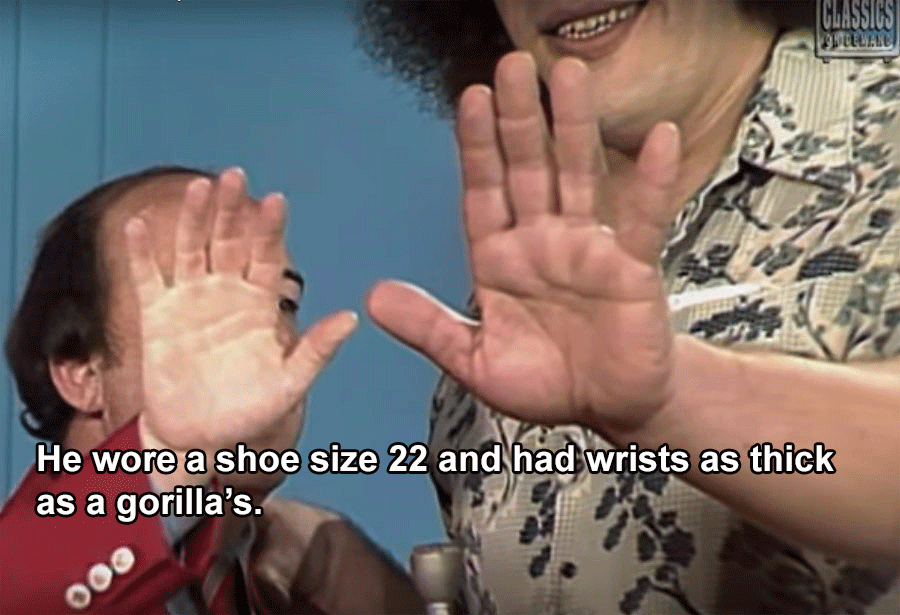 He insisted on picking up the check while at dinner with Wilt Chamberlain and Arnold Schwarzenegger. When the men said they wanted to pay, Wilt helped Andre pick Arnold up and carry him outside. Universal Pictures
If a friend drove a small car, he would sometimes pick it up and move it as a practical joke.WWE/YouTube
When he checked out of the London Hyatt after filming The Princess Bride, he had a bar tab of nearly $40,000.20th Century Fox
His The Princess Bride co-stars Cary Elwes and Mandy Patinkin were often hungover on set because of drinking with Andre the night before. 20th Century Fox
He wore a shoe size 22 and had wrists as thick as a gorilla’s. WWE/YouTube
He didn’t often order big meals unless he wanted to show off, but could eat 12 steaks in a single sitting. Russell Turiak/Getty Images
A world champion beer drinker, he holds the unofficial title for most beers consumed in a single sitting: 156.
By age 12, he was already over 6 feet tall and weighed 200 pounds.Universal/Corbis/VCG via Getty Images
He left home at 14. When he returned at 19, he’d grown so much his parents didn’t recognize him.Universal/Corbis/VCG via Getty Images
His fingers were so big that he had to use a pencil to dial a rotary phone. 20th Century Fox
According to Hulk Hogan, Andre the Giant used a bathtub as a toilet on more than one occasion while drunk.WWE/YouTube
He didn’t like wrestling Randy “Macho Man” Savage because he felt Savage lathered on too much baby oil. WWE
His fingers were so large that a silver dollar coin could pass through his rings.Skeet1957/Flickr
He is the reason a WWE Hall of Fame exists. It was created after his death and he was the first and only entry at the time. Miguel Discart/Wikimedia Commons
A giant can produce some giant farts and wrestler Jake the Snake said Andre once farted on him for a full 30 seconds during a match.John McKeon/Wikimedia Commons
He once stole a pair of horse-drawn carriages with wrestler Dusty Rhodes after getting drunk in a New York City bar.Wikimedia Commons
Because of his size and years of wrestling, when he returned to the ring in 1986, he had to wear a back brace under his black singlet. WWE
WWE boss Vince McMahon flew to England to visit himon the set of The Princess Bride and convince him to wrestle Hulk Hogan for WrestleMania III.20th Century Fox
He didn’t like to go out shopping because his size attracted crowds, but he loved spending fistfuls of cash via TV shopping network QVC. John McKeon/Wikimedia Commons
When not wrestling, he enjoyed riding his ATV and raising cattle on a ranch in North Carolina. Jeff Goode/Toronto Star via Getty Images
Vince McMahon had a custom van with a raised ceiling and couch to make traveling easier for the giant.Wikimedia Commons
He spent most of his career wrestling for WWF, but made his final TV wrestling appearance with rival WCW at their 1992 Clash of Champions XX event.WWE/YouTube
The character Hugo Andore from the video game Final Fight is an homage to Andre.Erin Combs/Toronto Star via Getty Images
His final film appearance came a year after his death in the 1994 comedy Trading Mom. Trimark Pictures
His dad was friends with playwright and novelist Samuel Beckett, who drove the young giant to school on more than one occasion.Bibliothèque/Wikimedia Commons
After he was cremated, his ashes weighed in at 17 pounds.John McKeon/Wikimedia Commons

Not only was wrestling great Andre the Giant literally much larger than most men, but his truly larger-than-life reputation and exploits paralleled his great size. It’s now been 25 years since the beloved giant died, but the public’s fascination with his life has faded very little.

Born Andre Rene Roussimoff in a small French village just after the end of World War II, the boy displayed symptoms of gigantism — the rare disorder that floods the body with growth hormones — early on and by age 12 was the size of an adult man. His large size made him a welcome hand on his father’s farm, but unsatisfied with farm work, he dropped out of school and moved to Paris to train in the profession that would bring him worldwide acclaim.

After making a name for himself on the European wrestling circuit, Roussimoff moved to Montréal, Canada where he eventually crossed paths with Vincent McMahon Sr., founder of the World Wrestling Federation (now World Wrestling Entertainment). It was McMahon Sr. who suggested the ring name of “Andre the Giant” and prove instrumental in launching the young wrestler to international superstardom. In 1973 at New York City’s Madison Square Garden, Andre the Giant made his U.S. wrestling debut, beating out fan favorite Buddy Wolfe.

Throughout the 1970s and 1980s, Andre the Giant helped sell out arenas all over the world alongside such iconic wrestlers as Hulk Hogan, Randy Savage, and Jake “The Snake” Roberts.

While Andre the Giant was finding success in the wrestling ring and with memorable TV and movie projects like The Six Million Dollar Man and The Princess Bride, he was also enjoying the fruits of his labor to great excess. Today, Andre the Giant facts and stories about his love of drinking abound; because he weighed more than 500 pounds, the giant could easily consume dozens upon dozens of beers or bottles of wine before feeling the alcohol’s effects.

“There are a lot of crazy stories about Andre that sound fake but most are true, especially his drinking, said former wrestler Gerald Brisco. “Andre used to ask me to get him six bottles of Mateus wine and ice them down. He would drink those before we went to the ring and no one could tell.”

However, gigantism certainly isn’t an easy condition to live with and, coupled with a life of taking punishment in the wrestling ring, Andre the Giant suffered unrelenting pain for much of his later life. Ultimately, while in Paris to attend his father’s funeral in 1993, the wrestling legend died of congestive heart failure in his hotel room at just 46 years old.

Professional wrestling may never see such a wrestler again, but as the Andre the Giant facts above prove, his legend will remain immortal.