Linsey Dawn McKenzie (born 7 August 1978 in Brent, Middlesex, England) is an English glamour model, pornographic performer, and television personality who made her topless modelling debut in the Sunday Sport tabloid newspaper on her 16th birthday in 1994. Known for her naturally large breasts, she went on to feature in a wide range of adult magazines, websites, broadcast media, and videos, including hardcore pornography productions after 2000.

She has attained minor celebrity status in the United Kingdom, where she has appeared on a number of mainstream television programmes, such as They Think It’s All Over, I’m Famous and Frightened!, The Weakest Link, and Celebrity Four Weddings. She has also appeared in documentaries about the lives of glamour models and was featured in Martin Gooch‘s 2002 film Arthur’s Amazing Things.

Linsey Dawn McKenzie was born in Brent, Middlesex, and she grew up in Wallington, Surrey. She is the youngest of three children; her parents, Tony and Lesley McKenzie, divorced in 1987.

In early 1994, when McKenzie was 15, she sent sample glamour photographs to local modelling agencies. She began her modelling career glamour modelling and swimsuit work, intending to progress to topless modelling when she turned 16 later that year. 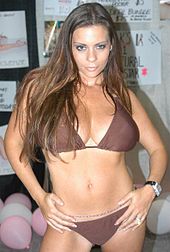 As McKenzie approached her 16th birthday, the Sunday Sport tabloid newspaper expressed an interest in turning her topless debut into a media event. Throughout June and July 1994, it published pictures of McKenzie counting down the days until it could legally show her topless.

After she turned 16, McKenzie continued to model topless for the Daily Sport and the Sunday Sport.She also made Page 3 girl appearances in tabloid newspapers The Sun and The Daily Star; posed topless in lads’ mags such as Loaded; appeared fully nude in British magazines such as Mayfair[5] and Men Only;[6] and performed in a variety of softcore videos.

On 29 July 1995, shortly before her 17th birthday, McKenzie did a topless streak at a televised Englandv. West Indies cricket match at Old Trafford. Wearing only a thong and a pair of trainers, she ran onto the field with the words “Only Teasing” written across her breasts.

After McKenzie turned 18 in 1996, she made her North American modelling debut in the breast fetishism magazine Score, which marked the occasion by making McKenzie the cover girl of its December 1996 “50th Anniversary” issue.

In the late 1990s, McKenzie was frequently featured on the adult-oriented channels L!VE TV and Television X. She continued to appear regularly in magazines, DVDs, Internet sites, and broadcast media until late 2004, when she took a break from modelling to have a child and undergo a breast reduction operation.

A biography of McKenzie, Temptress: The Linsey Dawn McKenzie Story, was published in 2015.

In 1996, McKenzie became involved in an extramarital affair with 27-year-old footballer Dean Holdsworth, who was then a striker for Wimbledon F.C. The relationship received widespread attention in the British media.

In 1998, she became engaged to actor Michael Greco, who at the time was playing the role of Beppe di Marco in the BBC soap opera EastEnders.[20] She twice became pregnant over the course of her 15-month relationship with Greco, but miscarried both times.

McKenzie began dating 21-year-old Terry Canty in 2000. The couple married on 21 April 2001[22] and Canty performed with McKenzie in her first heterosexual hardcore photoshoots and video. Scenes featuring the couple were released on the 2001 DVD Ultimate Linsey. The couple separated six weeks after their wedding, and they divorced in 2001.

In 2004, McKenzie began a relationship with former Wimbledon F.C. and Northern Ireland footballer Mark Williams. On 16 May 2005, she gave birth to the couple’s baby boy. McKenzie married Williams on 5 January 2006.