The change of seasons often brings a change in one’s palate. You might seek out a hearty stew or casserole in the colder months, but come summertime, a light, refreshing bite or a fresh salad might be in order. And if you’re a beer connoisseur, your desire for a thick stout might wane as summer approaches, and you turn to light, refreshing brews, such as a shandy or radler (pronounced /RAHD-luh/), to enjoy on your patio. Some readers may have also experienced the French version of the shandy called panaché, which means “mixed” in French. 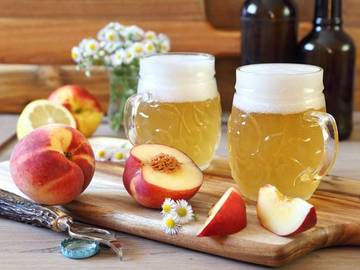 Charles Dickens once commented that it was the perfect “alliance between beer and pop.”

Whereas, nowadays, a shandy is considered a blend of beer with any nonalcoholic beverage, the original specifically was beer mixed with ginger beer or ginger ale. (Both ginger beer and ginger ale are believed to have originated as alcoholic brews but were then processed as soft drinks, making their names misnomers as early as mid-19th century. Typically, ginger beer has a stronger gingery flavor.) Another traditional mixer for a shandy is carbonated lemonade.

The term shandy itself is a shortening of shandygaff, which first appears in 19th-century England. Although we don’t know for sure how the name shandygaff came about, we are fairly certain that the concept of a beer cocktail traces back centuries earlier. And we are definitely sure that a shandygaff was enjoyed. Charles Dickens once commented that it was the perfect “alliance between beer and pop.” In The Adventures of Mr. Verdant Green—an 1853 novel about a first-year undergraduate at Oxford University written under the pseudonym Cuthbert M. Bede—Mr. Green states that a friend taught him “to make shandy-gaff and sherry-cobbler …: oh, it’s capital!” By late-19th century, shandygaff is shortened to shandy, and creative imbibers begin experimenting. Refreshing, effervescent lemonade becomes an early substitute for ginger beer. Other mixers such as orange and grapefruit juice soon follow, along with cider.

Shandygaff is a compound word, but as to why the base words came together (or in what senses they are used in) is a mystery. Inevitably, there has been speculation. Some people have suggested that gaff is a portmanteau of ginger and half. That’s possible, but what about the other multiple uses of gaffthat enter the English language by mid-19th century? Quite possibly, one of those could have been applied jocularly for the beverage’s name.

The most common use of gaff is as the name for the spear or hook used for lifting heavy fish out of the water. Another gaff refers to loud laughter (as in “his resounding gaffs filled the room” or “he gaffed merrily”)—senses found in dialectal Scottish English. There is also gaffmeaning “a fair” or “a place of lower-class amusement (as at a theater or music hall).” In a 1918 collection of essays entitled, fittingly, Shandygaff, American writer Christopher Morley links the word shandygaff to the lower classes, “Shandygaff is a very refreshing drink, being a mixture of bitter ale or beer and ginger-beer, commonly drunk by the lower classes in England, and by strolling tinkers, low church parsons, newspaper men, journalists, and prizefighters.” As early as the 17th century, shandy was also being used in dialectal English as an adjective to refer to people who were wild, boisterous, or slightly crazy. Perhaps, the “place of lower-class amusement” sense of gaffand this sense of shandy were blended together. It’s certainly not unreasonable to think that people drinking shandygaffs in lower-class establishments got a little wild—we just need to find evidence corroborating this etymology.

The radler is a lesser-known beverage—essentially, it’s a German lemon shandy—but like shandygaff, its history is uncertain. In German, the word Radler originally means “bicyclist,” and stories on the origin of the drink’s name are centered on that meaning. Anecdotal evidence suggests that the drink was conceived by an innkeeper in the early 20th century who either needed to stretch his supply of beer to accommodate his customers—who were mostly cyclists (his inn was, apparently, on a popular bike route)—or desired to provide a refreshing, less-alcoholic beverage to the riders. In either case, his solution was to mix the beer with the lemon soda that he had on hand. The thirsty customers loved it, and the beverage was apparently named after the cyclists. We’ll say that the drink likely has a connection to cycling, but we are skeptical about the name’s origin story—and its many versions.

The fact that we’re uncertain about the etymologies of shandy and radler doesn’t change what the words signify: a beer cut with a refreshing nonalcoholic mixer (and the ratio of beer to mixer is according to preference). Enjoy a shandy or radler on a hot day, or if you’re not a beer drinker, maybe mix up some iced tea and lemonade and enjoy an Arnold Palmer instead.