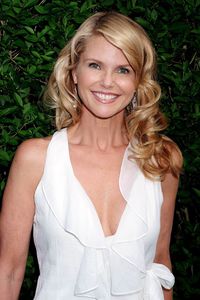 Christie, whose birth year sometimes appears as 1953, was born to Herbert and Marjorie Hudson; the couple later divorced. At an early age she moved with her family to the Los Angeles area, where her mother married Don Brinkley, a successful TV writer who later adopted Christie. While growing up as a self-described “surfer girl,” she took an interest in French culture and subsequently enrolled in the high school of the French-oriented Lycée Français de Los Angeles. After graduation and (by some accounts) a brief period as a college student, she moved to Paris in the early 1970s. While studying art and working as an illustrator, Brinkley was “discovered” by an American photographer and began her career as a model. She soon signed with the Elite Model Management agency.

Later in the 1970s Brinkley moved to New York City and joined the Ford Model Agency. With her wholesome looks and athletic physique, she quickly became highly sought after. In 1976 she signed a contract with CoverGirl, becoming the “face” of the cosmetics firm. That year she was also hired as a Sports Illustrated swimsuit model. Brinkley proved so popular that SI put her on the cover of its annual swimsuit edition for three consecutive years, 1979–81. She also graced the covers of Glamour, Harper’s Bazaar, Cosmopolitan, and many other magazines. The exposure made her a household name.

After appearing in commercials, Brinkley made her feature film debut in 1983, with a small part in the comedy National Lampoon’s Vacation. Few actingappearances followed, though she notably had a recurring role in the TV sitcom Parks and Recreation. In addition, she made her Broadway stage debut in 2011 as Roxie Hart in the long-running revival of the musicalplay Chicago. She also played the character in the national touring company and on London’s West End.

Brinkley was married several times, most notably to pop singer-songwriter Billy Joelfrom 1985 to 1994. She had previously starred in the music video for his song “Uptown Girl” (1983). Brinkley’s books include Christie Brinkley’s Outdoor Beauty and Fitness Book (1983) and Timeless Beauty (2015).