As the frost begins to spread across the land, it becomes ever harder to leave our tightly tucked quilts. What we need is something equally quilted.

Like a jacket made of a quilt. A quilted jacket, if you will. And even if you’ve never been pheasant shooting in the three counties let us tell you, it’s a gloriously cushy thing.

Giving it these posh-boy connotations isn’t too unfair when you find that the style started life as a quilted vest actually meant for shooting in the mid-1960s. The quilting part refers to garment that stitches at least two layers of cloth – traditional quilted jackets add a third layer of padding to create that distinctive diamond pattern.

The first version was made out of a synthetic polyester to help with the soggy British weather while the quilting element provided a light, natural insulation without the need for the ethically dubious down padding like its less posh cousin the puffer (although some options do contain down).

Later versions brought waxed cotton to the mix for a softer feel, while the early green and navy versions have remained the standard go-to shades, as the style grew in popularity largely thanks to its flexibility of movement and its dressed-up but still casual appearance.

Pair with a smart cotton button-down shirt and chinos for a look that reeks of the countryside, or a crew neck and slim jeans for a contemporary appearance better suited for shooting the breeze at the pub than any wild game.

The Best Brands For Quilted Jackets

Barbour has been outfitting outdoorsy types since the 19th century, and although it hasn’t been making quilted jackets for as long as that, the style has still become synonymous with the British heritage brand. Having started life as the Countryman jacket in 1979, Barbour changed the name of its flagship QJ to the Liddesdale in 1994 after the valley of the same name in the north of England (a spot where a warm quilted jacket would certainly not go amiss).

The Liddesdale, which consists of a corduroy collar and a diamond pattern, isn’t the only quilted jacket in the Barbour armoury though, with other popular versions including the Edderton which comes with a shorter, blouson cut and the Chelsea Sportsquilt which is modelled after the ones worn by horse riders. In its two decades, Jack Wills has positioned itself as the offspring of Barbour so while papa is galavanting around the estate in his Land Rover and Barbour jacket, the heir to the family jewels can crawl to lectures in their Jack Wills quilted car coat.

And with a flannel lining, corduroy collar and chunky front pockets there ain’t much difference between this version and the Barbour Liddesdale, apart from the branding and being less spenny of course. If there’s anything Burberry does well it’s reeling off British classics with a high fashion edge (and adding that oft-repeated, never bettered Burberry check). It’s not all about the style with the luxury fashion house on this one though, with cutting-edge thermoregulation technology to help keep your core body temperature at the ideal 37.5°C to go with the sharp Harrington cut and that check. Shooting a little younger than the other British brands on this list, Superdry aims for the streets rather than the well-beaten country road on its quilted jackets.

And so we get an icy blue side stripe bolting down the sleeve, a protective hood because a flat cap is too sepia-toned for street style and a chevron styled pattern leading into the more traditional diamond up top. By definition shopping at a department store can be a mixed bag, but with British chain John Lewis, quality is guaranteed (it’s quite literally ingrained in the brand). Its own brand quilted jackets are a particularly safe option among a hard-to-go-wrong style.

Its classic version is made out of a waxed cotton so you don’t have to worry about getting caught in one of those pesky showers, while a slim fitting mid-length cut flatters those broad shoulders. Don’t forget to add Ted Baker into the mix for star baker in the great British quilt off. The premium high street retailer excels at shaking up design standards like the quilted jacket, and so we get a classic Harrington shape cut to the waist with a square, not a diamond pattern and a jazzy inner lining to flash at passersby. Preppy giant Gant is targeted at a bit more of the older gent than its fellow American rivals, Tommy Hilfiger and Ralph Lauren, a demographic where the quilted jacket is fertile territory. Cut like a field jacket with extra length at the hem and more room around the body and waist this QJ is forgiving enough for all gents to sport, and with padding made from recycled material. Wait, did we just say sustainable? Well, that’s one more reason to buy. The quilted jacket is the jewel in the Joules outerwear crown and that’s quite enough puns so let’s move on swiftly to the brown outer making a welcome change from the standard blue, the longer lengths and the bevvy of pockets.

And outside of Barbour, the British country lifestyle clothing brand has one of the widest collections. So quilt us up, Joules, we’re ready to get snug. Having repositioned itself from solely a heritage brand to a luxury sportswear maker championed by the likes of David Beckham and Brad Pitt earlier this decade, Belstaff has made a habit of taking classic outerwear out of its stuffy cupboard and into a box labelled cool as a leather-clad cucumber.

Case in point is its reinvention of the quilted jacket, which is a lot less country bumpkin and a whole lot more motor racing rogue, clad in super sleek black with reinforced shoulders that mimics the brand’s stylish leather jackets. 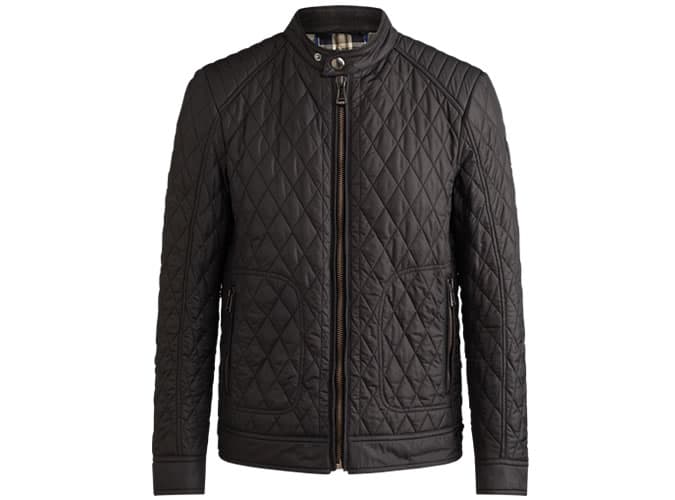 In a list dominated by British brands it’s refreshing to see the Italians rearing up into the QJ dogfight. It’s a mighty fine stallion too – the imperious Emporio Armani – the second brand from Giorgio Armani and one of only two that is designed by the ledge himself.

This quilted bomber jacket is indicative of the range – all-black and as slick as a dollop of hair gel – you’ll probably catch Keanu Reeves slo-mo repping this in the Matrix 4.

Now we have to admit you won’t catch grime superstar Stormzy in a quilted jacket. Really, what? Shut up? Adidas do a quilted jacket? Maybe you just might then, along with all the other hypebeasts and rappers who worship the sportswear brand, with this glossy jacket that takes after the traditional Adidas track top (you know that one that Stormzy fella wore in that video) with the addition of a striking zig-zag pattern. For more than 60 years Canada Goose has been making Arctic-worthy down jackets and other winter woollies worn by explorers and research scientists. The brand is best known for its distinctive red, white and blue circular logo, which is a reverse image of the North Pole, as well as its technical but fashionable coats, which have been worn by supermodels, rappers and tonnes of well-heeled teens. Canada Goose is involved in several environmental and social initiatives but has come under fire in recent years by animal rights groups, especially for its use of coyote fur on hoods. This is a brand for people who really value being warm, but not so much for veggies and vegans.

Unsurprisingly, Shackleton London is inspired by polar explorer extraordinaire, Ernest Shackleton. Launched in 2016, the British brand’s speciality is engineering extreme-weather performance apparel that combines advanced technologies with top quality materials. Its parkas and jackets undergo extensive field-testing and have been proven in Antarctica and the Arctic, having been used by record-breaking polar explorers in recent years. Cool.

The most ‘fashion’ of serious performance wear brands, you can see Moncler’s latest down coats on catwalks. The Italian sportswear co. was founded in the 1950s and is known for its distinctive logo and tricolour details. In 1954, Moncler quilted jackets were chosen to equip the Italian expedition to K2, which culminated with the conquest of the earth’s second-highest summit, and were worn by French skiers during the Grenoble Winter Olympics in 1968. In more recent times they are the choice of many a model and celeb, but the brand’s fashion credentials are backed up by its technical heritage.

Arc’tryx is a Canadian outdoor high-end clothing co with a distinctive logo of a bird fossil. (You know the one.) The brand often divides its products by the activity they’re best suited for, making it easy to buy the right kit to suit your hobbies and it’s stand-out jacket if the Alpha SV. Like many of the other brands on our list Arc’tryx treads that fine and difficult line between being practical and fashionable, making it a great option for outdoorsy and city types.

If you want some great quality and fashionable outerwear, The North Face offers one of the widest and most reasonably priced selections out there. The brand’s technical fabrics really stand up to scrutiny and its coats are reliably warm and dry while comparably-priced offerings from the high street might not be. Plus, they are fashionable and even a status symbol in some parts of the world, such as South Korea (apparently). Whether you’re looking for a great waterproof for less than £100 or a reasonably-priced synthetic down coat, The North Face will come up with the goods.